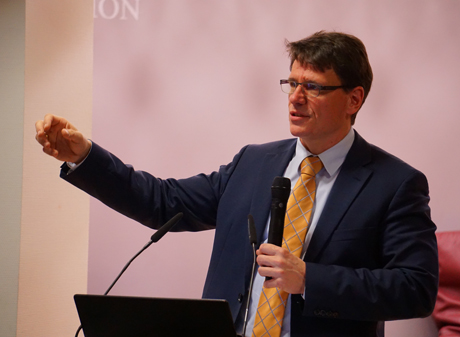 Opening of the Einstein Center for Regenerative Therapies

Congratulations BSRT and ECRT: Two institutions that support young scientists in Berlin and Brandenburg who are doing research in the field of regenerative therapies celebrated their tenth anniversary together at the beginning of December - the Berlin-Brandenburg School for Regenerative Therapies (BSRT) and the Einstein Center for Regenerative Therapies (ECRT). About 150 guests from science and politics accepted the invitation to the event in the rooms of the BSRT and the ECRT at the Campus Virchow-Klinikum of the Charité.

Prof. Dr. Georg Duda, spokesperson of the BSRT and the ECRT, said at the opening of the ceremony: "We are introducing young scientists to the interdisciplinary field of regenerative medicine and are expanding the cooperation between university and non-university scientists and institutions," he explained. The professional cooperation between engineers, biologists and physicians enables new therapeutic approaches. The foundations for this are laid at the BSRT graduate school and the ECRT innovation driver. Regenerative medicine deals with the treatment of various diseases by restoring dysfunctional cells, tissues and organs. This is done by stimulating the body's own self-healing and repair processes or by biological replacement in the form of living cells.

In his welcoming address, Prof. Dr. Karl Max Einhäupl, CEO of the Charité, emphasized: "Regenerative medicine is one of the main focuses of the Charité. What is special about the BSRT Graduate School is the interdisciplinary and international nature of its students. Both are of great importance for progress in science. "What we are celebrating today is a great example of cooperation between different disciplines, but also between the individual institutions," explained Steffen Krach, State Secretary for Science and Research. This is exemplary for many other areas. He emphasised: "You have done a lot for the work of young researchers, for which I would like to thank you very much.

The festivities took place in conjunction with the BSRT Symposium 2017, to which PhD students of the Graduate School invited renowned international guest speakers on the topic of "Recognize, Repair, Regrow - Personalized Biomedicine Rises". The conclusion of the panel discussion "Homo Deus": Are we creating super humans and is our society ready for it? in which the scientists Prof. James Adjaye from the University of Düsseldorf, Prof. Andrew Carr from the University of Oxford as well as the politician Dr. Jan van Aken and the bioethicist Prof. Paul Root Wolpe from Emory University participated: Scientists should reflect their research more strongly. In publications and research proposals, the advantages of new therapies are brought to the fore. However, the limits and problems should be discussed just as strongly.

The BSRT is the graduate school of the Translational Research Centre Berlin-Brandenburg Centre for Regenerative Therapies (BCRT). It was founded on 1 November 2007 as part of the Excellence Initiative. The international graduate school offers interdisciplinary training and research opportunities in the field of regenerative medicine for doctoral and postdoctoral students. Since its foundation, more than 200 young scientists from more than 30 nations have carried out research at the BSRT. The ECRT sees itself as a think tank. It has been funded by the Einstein Foundation Berlin since January 2017. At the Charité, it complements and unites the existing BCRT and BSRT structures. The ECRT's Kickbox Seed Grants enable young scientists to try out their new ideas.