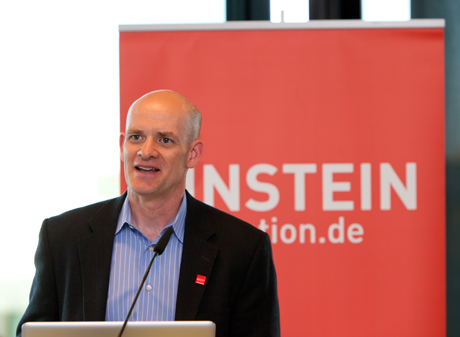 They are a great opportunity for medicine and pharmacy: In the future, body cells could be used instead of drugs to cure diseases. Einstein Visiting Fellow David Mooney is working on turning this fascinating idea into reality. On August 21, at the Einstein Panel "Can plastic replace pills?" meeting at the Otto Bock Science Center, a controversial discussion took place about the chances that the new therapy will soon be used in hospitals.

The vision is impressively simple: body cells are multiplied in the laboratory, added to the solution and injected into the patient. In the body, healthy cells accumulate on damaged tissue and affect the functions of the tissue. "But unfortunately it's not that simple," explained bioengineer David Mooney from Harvard University in his keynote speech. "Only a few cells end up where we want them to be."

That is why David Mooney and his colleagues at Harvard and the Berlin-Brandenburg School of Regenerative Therapies are developing plastic materials - so-called polymers - that protect the cells as they travel through the body and take them where they are needed.

In Berlin, David Mooney is investigating how biomaterials can be used to cure damaged skeletal muscles. For example, the Einstein Visiting Fellow uses alginate as a biomaterial - a substance that was previously used primarily as a gelling agent or to stabilize foam.

However, Michaela Kneissel from the research department of the pharmaceutical company Novartis assumes that further research will be necessary for a long time before biomaterials find their way into the treatment room. "I think that biomaterials may be able to supplement tablets, but they can never replace them," says the expert in musculoskeletal disorders. She sees one difficulty in the fact that the functionalities of the cells change with the age of the human being.

In fact, our experiments in the laboratory are often too simple and we plan optimistically: "Innovations have to work just as well in old and frail patients as in young ones," explains Charité Professor Georg Duda, who invited David Mooney to Germany. "The challenge is to develop solutions that work effectively in many patients and in complex disease situations," he says. Even institutions such as health insurance companies do not yet know how to deal with the new possibilities.

Reinhard Schnettler, Professor of Trauma Surgery at the University Hospital Gießen, is also familiar with the pitfalls of biomaterial research. As early as the 1980s, Schnettler was working on cell replacement using biomaterials and had to suffer setbacks. He also believes that biomaterials will only be medically applicable in many years' time.

However, David Mooney has already achieved considerable success in just a few years: "The idea for a therapy came to us four years ago. And we are already in the phase of clinical trials." But the Einstein Visiting Fellow also emphasizes: "Therapy with biomaterials is not a revolution, but an evolution of medicine.