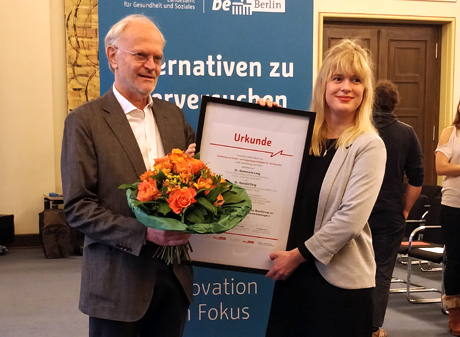 Dr. Annemarie Lang from the Medical Clinic with a focus on Rheumatology and Clinical Immunology of the Charité and Dr. Rainald Ehrig from the Julius Wolff Institute of Biomechanics and Musculoskeletal Regeneration of the Charité and the Zuse Institute Berlin received the award. Together with their team, they have succeeded in simulating cartilage changes both in cell culture and in parallel in a computer model. The processes simulated in this way reflect the onset of arthrosis in humans.

"Up to now, basic research on osteoarthritis and other joint inflammations has often relied on laboratory animals," explains Dr. Lang, who is also a member of the Charité 3R spokesperson council. "These animal experiments have made an important contribution to the development of new drugs and to the understanding of the diseases, but they also repeatedly show limitations. We are convinced that the combination of the two new models can contribute in the future to reducing the number of experimental animals and improving the transferability of the research results to humans. The prizewinners also want to make their work useful beyond the clinical picture of osteoarthritis. "We will now work on imaging the entire joint in our cell culture and computer model," said Dr. Ehrig. "This should enable us to simulate rheumatoid arthritis as well as joint inflammation and to test new therapeutic approaches".

The award was presented by Dr. Dirk Behrendt, Senator for Justice, Consumer Protection and Anti-Discrimination, and Franz Allert, President of the State Office for Health and Social Affairs (LAGeSo). This year two projects were awarded in equal parts. Further prize winners are Dr. Johanna Berg and Prof. Dr. Jens Kurreck from the Institute of Biotechnology at the Technical University of Berlin with their project "3D-Biodruck von Organmodellen". The prize of the State of Berlin for the promotion of research into alternative and supplementary methods for animal experiments in research and teaching is initiated and coordinated by LAGeSo. It is endowed with a total of 40,000 euros and has been awarded every two years since 2011 in cooperation with the German Association of Research-Based Pharmaceutical Companies (vfa). Funding is provided for research projects from Berlin or Brandenburg that contribute to avoiding or reducing the use of laboratory animals or to reducing the burden on animals in animal experiments.