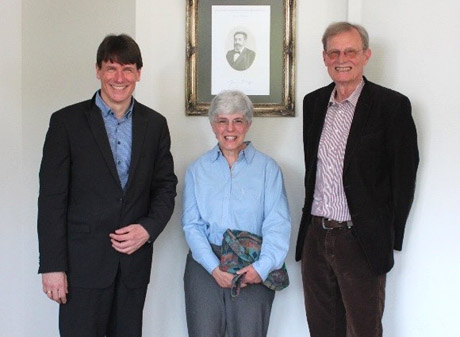 As part of a Berlin trip, Dr. Katherine Wolff, with a part of her family, moved stumbling blocks ​​as a reminder of the family members who were exiled in the Nazi era and as a reminder to the present generation. They visited the Charité's Julius Wolff Institute (JWI) last Thursday.

The research institute, with its focus on biomechanics and musculoskeletal regeneration, is in the tradition of Dr. Wolff's great-grandfather Prof. Dr. Julius Wolff. He is the founder of the Charité's Orthopedic Clinic and, with his Wolff's Law, he illustrated the direct connection between mechanics and biology. In doing so, he build the basic understanding of modern orthopedics. With his law, he postulated that the shape and structure of the bone constantly adapts to the effective mechanical stresses; simply said "form follows function". The law still applies today, which is why Prof. Wolff can be described as a pioneer of modern osteoporosis therapies. Recent studies, e.g. regarding stem cell differentiation, show that mechanical forces and geometrical structures directly influence degeneration, healing and regeneration of bones.

Prof. Dr. Georg Duda and Prof. Dr. Georg Bergmann (Director and Vice Director of the JWI) welcomed the guests and presented current research projects of the institution. The aim of the Julius Wolff Institute is, according to Professor Duda, to transfer excellent research of basic orthopedics and trauma surgery into sustainable solutions for patient treatment.

Prof. Bergmann and Dr. Philipp Damm first presented instrumented implants. They showed how through special implants (for example the knee and the hip) loads and moments are acting in humans are measured live. While walking, the 2.7-fold body weight acts as a force on the hip. A similar value also occurs in aqua-gymnastics. "Only while swimming and cycling the forces are less. When stumbling, even 8 times the body's own weight can affect the hip." says Dr. Damm.

A special highlight was presented to Dr. Wolff by Dr. Christian Balkovec. He showed a thigh bone personally prepared by Julius Wolff, which shows the typical bone structures on which he derived mechanical stresses.

Recent work by the Julius Wolff Institute also shows how cells orient themselves to mechanical framework conditions in the body. In the cell laboratory, Dr. Ansgar Petersen and Dr. Sven Geissler described how cells pull on artificial tissue matrix (so-called biomaterials) and deform them. Such materials are used to accelerate bone and muscle healing.

The Wolff family gave their thanks to the members of the Julius Wolff Institute and a new meeting was agreed for the 10th anniversary of the institute in the upcoming year.

Dr. Katherine Wolff is the great-granddaughter of Julius Wolff. She has studied theology and is the sister of Our Lady of Sion, a Catholic religious community whose concern is the reconciliation between Christians and Jews. Dr. Wolff lives in Israel, where she leads a life of prayer in solitude and silence.