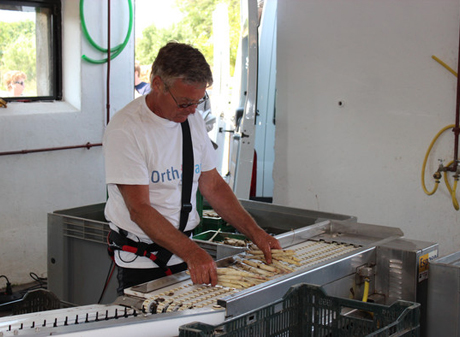 Scientists measure the stress on the hip joint during asparagus stinging

The asparagus season has officially begun. But one pleasure is another's burden. Field work, especially cutting asparagus, is a physically demanding task - as the results of the Charité now prove.

Scientists from the Julius Wolff Institute of the Charité - Universitätsmedizin Berlin last year measured the stress on the hip joint during asparagus pricking and further work directly in humans. The first results show that asparagus stings place a particularly high strain on the hip joint. The strain is similar to that of jogging. During certain movements during asparagus stinging, the engineers measured loads of up to 4.5 times the body weight in the hip joint. For a person with a body weight of around 70 kg, these are contact forces of 315 kg with which the hip joint is loaded. Prof. Dr.-Ing. Georg Bergmann, Deputy Director of the Julius Wolff Institute, notes that the high loads are caused by the posture: "In order to maintain balance with the upper body bent forward, numerous muscle groups around the hip are activated. The muscle contractions ultimately cause the exceptionally high contact forces in the joint.

The scientists can measure the forces and moments acting on the joints using instrumented endoprostheses. Clinically tested implants are equipped with measuring sensors and microtechnology in the laboratory for this purpose. An external magnetic field supplies the integrated microelectronics with energy during the measurement. The load data is transmitted wirelessly from the body via an internal antenna. In recent years, measurements have been taken during everyday activities such as walking, climbing stairs, jogging, cycling and other sports. However, the largest loads measured so far occurred during stumbling. The hip joint was loaded with up to 9 times the body weight.