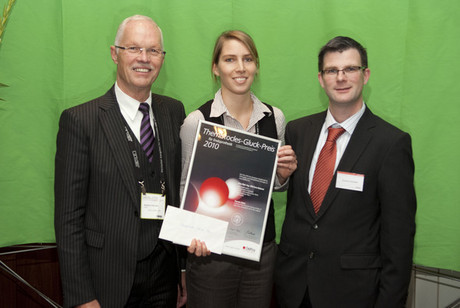 Ines Kutzner, scientist at the Julius Wolff Institute, has been awarded with the Themistocles-Gluck Award 2010. She received the award at the German Congress of Orthopaedics and Trauma Surgery in Berlin. The Themistocles-Gluck Award is the highest award for endoprosthetics in Germany given by the Deutsche Gesellschaft für Orthopädie und Orthopädische Chirurgie (DGOOC). The 28year old medical engineer received the award for her work on the loading of the knee joint during activities of daily living. In the Journal of Biomechnics, she and her colleagues from the research team Instrumented Implants published the first comprehensive data collection that documents the real measured loading of the human knee joint. The data was gained by in vivo measurements with instrumented implants in five patients.

So far, this information is the most comprehensive data collection regarding real measured loading of the knee joint. The detailed measurement results will be used for validation of musculoskeletal computer models that are able to calculate the loading of joints. At the same time these data can be used for preclinical testing of implants. A selection of data can be found and downloaded at the public database www.Orthoload.com.

The yearly Themistocles-Gluck Award has been awarded since 2000 by the Deutsche Gesellschaft für Orthopädie und Orthopädische Chirurgie and is endowed with 10,000 Euros. The prize awards innovative diagnostic or application-technological ideas in endoprosthetics. Two years ago, in 2008, Peter Westerhoff, also scientist at the Julius Wolff Institute, received the award for his work on the loading of the shoulder joint.