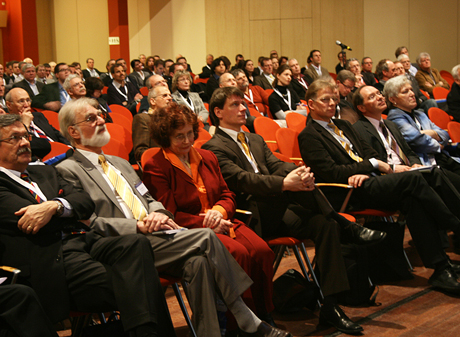 Over 1,500 physicians and researchers met from March 3 to 6 for the Osteology Congress 2010 in Berlin and discussed the latest advances and findings in bone and muscle research

This year's national congress, which is held annually by the German Association of Osteology (DVO), was organized by Prof. Georg Duda, Director of the Julius Wolff Institute. The congress was under a special light: the 25th anniversary of interdisciplinary osteology in Germany and the beginning of the last year of the worldwide Bone and Joint Decade. These highlights were also reflected in the four-day program. In addition to the topics osteoporosis, mechanobiology, bone and implants, regenerative medicine and health care research were also the focus of the congress.

An important issue of the congress presidents Prof. Georg Duda and Prof. Franz Jakob was to emphasize the importance of bone health in general: "The health of bones and joints is a medical and social challenge. Only by researching new  therapy and prevention methods will we be able to guarantee the preservation of physical performance and mobility into old age". This message is also supported by the head of the department of health research in the Federal Ministry of Education and Research, Dr. Gabriele Hausdorf, and the Olympic champions Dr. Sabine Bau and Birgit Fischer at the press conference on Friday.

Dr. Helge Braun, Parliamentary State Secretary of the Federal Minister of Education and Research, also attended the subsequent festive event. In his speech > Braun underlined the importance of bone and muscle research in Germany and pointed out the commitment of the Federal Government to research into musculoskeletal diseases. Meanwhile, he put the brakes on overly high expectations of higher investments, as funds are severely limited due to the financial crisis and the federal government's austerity program. At the same time, State Secretary Braun wished for a stronger exchange of ideas and invited to use the meeting at the Osteology Congress as a prelude to a regular dialogue between politics and research.

Prof. Georg Duda expressed his satisfaction with the results of the Osteology Congress: "We broke all records this year. We were able to register an outstanding number of participants and the largest number of exhibitors so far. In addition to the enormous interest in the topics, the scientific level of the lectures and presentations was also extremely high. At the same time, I am very pleased that the Federal Ministry of Education and Research supported us and recognized musculoskeletal diseases and injuries as a research segment in its own right. This is the only way we can further improve the quality of musculoskeletal research in Germany."