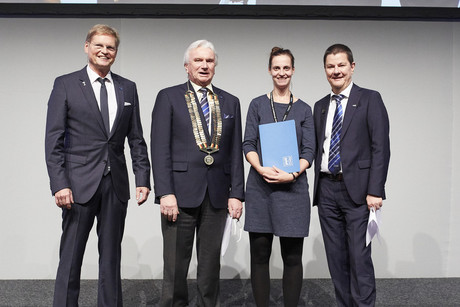 The German Society for Trauma Surgery (DGU) has awarded two Charité researchers for their work in the field of orthopaedics and trauma surgery. Privatdozent (PD) Dr. Johannes Keller from the Center for Musculoskeletal Surgery at the Campus Virchow-Klinikum was awarded the Hans Liniger Prize. This year's doctoral prize went to Dr. Claudia Schlundt from the Julius Wolff Institute of Biomechanics and Musculoskeletal Regeneration.

This year, two out of three prizes awarded annually by the DGU to promote accident surgery research went to the Charité. The two awards were presented at the German Congress for Orthopaedics and Trauma Surgery (DKOU), which took place from 23 to 26 October in Berlin.

In his study, PD Dr. Keller investigated mechanisms of communication and regulation in bone metabolism at the cellular, molecular and clinical level. He made groundbreaking discoveries about the role of a number of specific signaling molecules in healthy bone metabolism. The study results expand the understanding of central mechanisms of bone metabolism and provide further starting points for new therapies of diseases of the skeletal system such as osteoporosis. The Hans-Liniger Prize for the promotion of young scientists is endowed with 10,000 euros.

Dr. Schlundt received the award for her dissertation "Impact of the adaptive immune system in bone fracture healing". In the study, the biologist used animal models to investigate the influence of certain T cells, which suppress an excessive reaction of the immune system, on the healing process of bones. The scientist was able to show that these so-called regulatory T cells have the potential to improve bone healing depending on the overall immune status. The results of the work clearly show how important it is for the success of immunotherapeutic treatment approaches to analyse the individual immune status of patients in advance in order to prevent the opposite effect. The doctoral prize of the DGU is endowed with 2,500 euros.