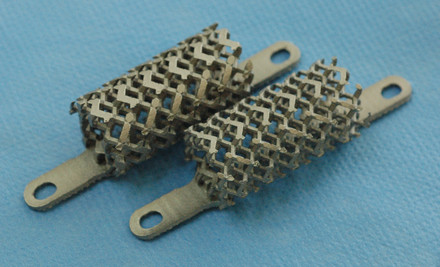 Scientists at the Julius Wolff Institute, the Berlin-Brandenburg Center for Regenerative Therapies and the Center for Musculoskeletal Surgery of the Charité - Universitätsmedizin Berlin have shown in cooperation with the Wyss Institute of the Harvard University Boston how mechanically optimized biomaterial constructs, so-called Titan Mesh Scaffolds, support bone healing to the maximum. The growth of new bone substance is particularly important in the treatment of large-scale defects. As the preclinical study shows, regeneration can proceed at different speeds and with varying effectiveness, depending on the stiffness of the respective implant network. Softer constructs promote healing, according to researchers in the current journal Science Translational Medicine*.

Extensive loss of bone volume in the limbs, which can be caused, for example, by an accident, a bone infection or in patients with bone tumours, represent a challenge from a therapeutic point of view and in accident surgery. Bone defects of this kind cannot heal on their own and, in the worst case, lead to the loss of the limb. One treatment option is to transplant the body's own bone tissue in the appropriate size and strength. This is often only possible to a limited extent. Alternatively, at the Center for Musculoskeletal Surgery of the Charité, patients with large bone defects can be treated with an individually fabricated titanium network structure, a so-called titanium mesh scaffold.

For this purpose, a three-dimensional data set of the affected bone and the defect is created using computer tomography. Using special laser technology, the corresponding Titan Mesh Scaffold can then be produced individually for each patient using the 3D printing process. During an operation, it is inserted into the bone defect to be treated. A total of 19 patients have been treated with such an implant at the Charité to date, with forward-looking results.

In order to stimulate bone healing, the Titan Mesh Scaffold is additionally filled with the patient's own bone, growth factors and bone substitute material. An interdisciplinary team of accident surgeons, engineers, veterinarians and biologists led by Dr. Anne-Marie Pobloth from the Julius Wolff Institute of the Charité has now tested whether the design of the titanium networks can also be mechanically optimized and whether the healing process can be further stimulated. "Initially, we used a computer model to mechanobiologically further develop a scaffold of standardized size. Subsequently, we were able to investigate the actual influence on bone healing in the large animal model. Since the bone healing process is very similar to that of humans, conclusions can be drawn about their healing," explains the specialist veterinarian.

The further developed scaffold consists of a repeating honeycomb-like structure that is supposed to better guide the ingrowth of bone tissue through channels. Varying diameters inside the construction provide different strength options. "We have assumed that the bone substance grows differently effectively depending on the stiffness of the implant network. Therefore, we investigated the effect of mechanical stimulation during the healing process in four test groups with varying stiffness," says Prof. Dr. Georg N. "The effect of mechanical stimulation during the healing process is not only determined by the stiffness of the implant network, but also by the bone structure. Duda, Director of the Julius Wolff Institute of Biomechanics and Musculoskeletal Regeneration and Vice Director of the BCRT. With a clear result, as accident surgeon Privatdozent Dr. Philipp Schwabe adds: "It has been shown that soft implants, which in combination with a clinically recognized plate system allow a higher mechanical stimulation of bone healing, already after three months on x-rays map a faster bone formation than the harder variants. Biomechanics had an influence on the quantity and quality of the newly formed bone as well as the type of new bone formation within the scaffold.

The goal of the research group is now to provide mechanobiologically optimized, softer titanium mesh scaffolds so that patients can also benefit from the findings and bone defect healing can be made easier in the future. It is also conceivable to use these procedures not only for the long tubular bone of the upper and lower limbs, but also in oral, maxillofacial and spinal surgery.