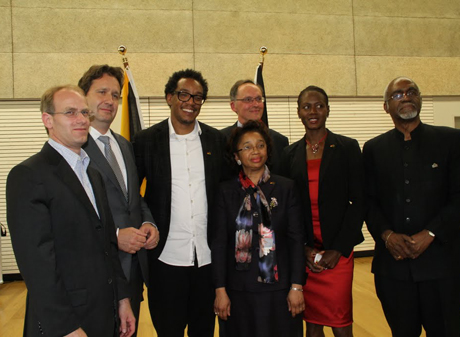 The secret recipe of Jamaican success: talent, promotion of young talent and yams

Merlene Ottey struggled with tears as she thanked the Jamaican Embassy for the award, which was presented to her on Tuesday, May 15 at the German-Jamaican Sports Forum at the Center for Sports Science and Sports Medicine Berlin (CSSB) of the Humboldt University in Berlin. "It's nice to be here in Germany again and to be able to say thank you again," said the exceptional athlete, who finally won her first gold medal at the 1993 World Championships in Stuttgart after 13 years as the "eternal runner-up" in top-level sport. Now she has been awarded by the Embassy of Jamaica for her performance and strength. During the sports forum she informed herself together with the ambassador Joy E. Wheeler and the former president of the International Criminal Tribunal for the former Yugoslavia (ICTY), Patrick Robinson about the possibilities of performance diagnostics and gait and functional analysis at the CSSB.

On the occasion of the 50th anniversary of Jamaica's independence, the Embassy of Jamaica, together with the CSSB, had invited to a joint sports forum to discuss the sporting success of the small island state. At the 2008 Summer Olympics, Jamaica took fourth place in the overall athletics ranking behind the USA, Russia and Kenya. In terms of population, Jamaica is one of the most successful nations in athletics. Patrick Robinson, an enthusiastic supporter of Jamaican sport and judge, attributes this success to the country's intensive promotion of young athletes: "The great success of Jamaican athletes in recent years, especially in athletics, is the result of a system of sports administration and promotion that we have been building up for around 100 years.

He presented CHAMPS, the largest junior competition event in Jamaica, as an example of successful promotion of young talent. At the beginning of the 1910 athletics competition, six schools competed. Today, boys and girls from over 150 schools compete against each other in various disciplines every year. "CHAMPS is the heart of the Jamaican sports system, which is a globally applicable and central model of our development," Robinson said. In addition to government and private development programs, each Jamaican school has a qualified coach who teaches sports and promotes talent. During his presentation, Robinson was forced to cite the Jamaicans' natural talent and nutrition as reasons for success. As Usain Bolt remarked in 2008, the solution may be in the Jamaican national dish of Yams, a root bulb.

The CSSB is also interested in the secret recipe for success. Prof. Dr. med. Karsten Dreinhöfer, representative of the CSSB Board of Directors and Head of the Chair for Musculoskeletal Rehabilitation, Prevention and Health Care Research, was fascinated by the efforts that Jamaica is investing in national sports promotion and was pleased that the Sports Forum is a first step in a dialogue with Jamaica: "I am very positively impressed by the enthusiasm and commitment for sport in Jamaica and hope that we can learn a lot from each other in the future". During the reception that followed, the participants' suggestions were discussed and initial cooperation approaches discussed.