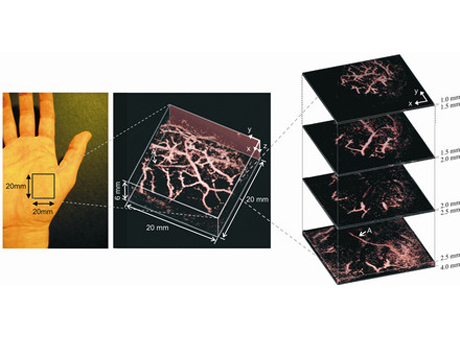 Charité receives 1.6 million euros for the establishment of a research group on photoacoustic imaging

The scientist Dr. Jan Laufer receives 1.6 million Euros from the European Research Council (ERC) for the establishment of a research group for Photoacoustic Imaging at the Charité - Universitätsmedizin Berlin. Laufer will start his work at the beginning of the new year at the newly renovated Institute Building South on the Virchow-Klinikum campus. His expertise will strengthen the interdisciplinary research work between the Julius Wolff Institute, the Berlin-Brandenburg Center for Regenerative Therapies and the Berlin-Brandenburg School for Regenerative Therapies.

The aim of the project is the investigation of stem cells during tissue regeneration using photoacoustic imaging. In order to achieve this, the biomedical engineer with a PhD will devote the next five years to the development of purely optical imaging technologies, genetic contrast agents and methods for the quantitative analysis of the data. Using these technologies and methods, the scientist hopes to characterise the behaviour of stem cells directly in bone and muscle tissue and as a function of physical and mechanical boundary conditions in vivo. The cellular and molecular imaging of tissues is not yet possible with current technologies and in the planned complexity. Photoacoustic imaging combines the advantages of optical and acoustic methods. Fast light pulses are transformed by absorption in the tissue into acoustic ultrasound waves, which can be measured and read by sensors. In contrast to conventional ultrasound  however, the acoustic radiation is generated by the tissue itself. This makes the results highly detailed and spatially representable on the one hand and on the other hand offers the possibility to use different absorption spectra of tissue dyes (e.g. haemoglobin, water and contrast agent) for quantitative, molecular imaging.

Jan Laufer, who is currently still working at University College London and who is moving to the Charité, has been instrumental in the development of this procedure in recent years. In initial studies, scientists in Great Britain were not only able to visualize tumors and vessels, but also to make functional and quantitative statements, including on oxygen saturation. Kay Raum, Professor of Mechanical Basics of Regeneration at the Berlin-Brandenburg School for Regenerative Therapies, is pleased that Laufer's expertise is moving to the Charité: "Jan Laufer and his team will continue to develop this innovative imaging technology in Berlin and in cooperation with the Julius Wolff Institute, the Berlin-Brandenburg Center for Regenerative Therapies and the Graduate School, thus broadening our scientific spectrum."

The ERC Starting Grant is awarded by the European Research Council (ERC) since 2007. Of the more than 4,000 project proposals submitted this year in the humanities, natural and life sciences, approximately 12 percent were awarded, seven of them in Berlin. Over the next five years, the Research Council will provide approximately 670 million euros in funding for the promotion of young researchers.