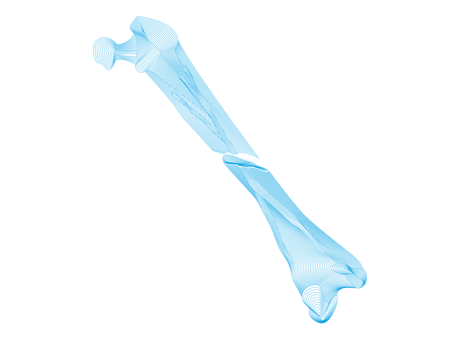 Bone is an interesting tissue from the researchers view as it is able to regenerate after injury. However, even today and with an adequate treatment 5-20% of all fractured patients experience a delayed or non-union.

Our group fosters research about the interaction of the skeletal and immune system during bone healing. Immune and bone cells share common precursor cells, from which they develop in the bone marrow. Both cellular subsets are highly interconnected on both, the cellular and molecular level.

There is a strong interplay between the bone cells (osteoblasts and osteoclasts) with specific immune cells during bone homeostasis as well as during bone regeneration after injury.

The interdependency of the immune and skeletal system during bone regeneration is now well acknowledged and the field of interdisciplinary research known as osteoimmunology is rapidly advancing. Significant morbidity is caused by diseases that are within the remit of osteoimmunology, such as rheumatoid arthritis, osteoporosis, multiple myeloma as well as breast and prostate cancer.

Posttransplant osteoporosis, resulting in frequent fractures with uneasy prognostic outcome, is also a consequence of changes in the immune system and a chronic inflammatory state following transplantation of solid organs or bone marrow(5, 6).

The interconnectivity and complexity of cellular and molecular interactions between the immune and bone tissue create a major challenge to develop therapeutic approaches that can specifically target one system without detrimentally affecting the other. In order to achieve this aim a thorough understanding of underlying processes is essential.

Cells of the skeletal and immune system

Osteoblasts are bone forming cells. They derive from mesenchymal stromal cells through the stimulation by e. g. bone morphogenetic proteins and TGF-ß. Osteoblasts produce the nonmineralized intercellular substance of the bone, the osteoid. Well-organized osteoblasts found on the bone surface are called bone lining cells.

Osteocytes develop from mature osteoblasts. They reside in the mineralized bone matrix in small lacunae and canaliculi (microscopic canals). Through numerous cell processes, they are connected with other osteocytes in the bone and thereby building a large cellular network. Their main task is the conversion of mechanical stimuli into biochemical signals.

T cells belong to the population of lymphocytes of the adaptive immunity. They develop in the thymus out of HSCs. T cells are characterized by their highly specific T cell receptor (antigen recognition site) and the expression of the surface molecules CD4 (T helper cells) or CD8 (cytotoxic T cells). They are one of the key player in the fight against pathogens like bacteria or viruses. T cells that have already encountered its specific antigen reside in the body, primarily in the bone marrow, as so called memory T cells. One special subset of T cells are regulatory T cells. They present some kind of the police of the immune system and are responsible for the immunological balance and self-tolerance of an organism.

B cells are another part of the lymphocytes of the adaptive immunity. They differentiate from HSCs in the bone marrow. Similar to the T cells, they are also characterized by their specific B cell receptor. B cells are responsible for the humoral immune response, mediated by antibodies (soluble B cell receptor).

Mesenchymal stromal cells are precursor cells of the connective tissue. They persist a high capacity to proliferate and to differentiate into the following main cell types: osteoblasts, chondrocytes, adipocytes and muscle cells.

Macrophages are phagocytic cells that play an important role in the clearance of pathogens. Based on the discovery of their phagocytic capacity these cells was given the name macrophages which means in Greek "big eaters". They differentiate from HSCs and share the same progenitor cells with the osteoclasts. It is more and more accepted that macrophages are indispensable during the process fracture healing and for a successful healing outcome. Macrophages that reside in the bone marrow are also called “osteomacs”.