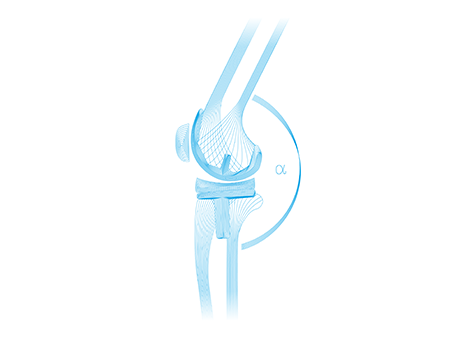 The loads acting in joint prostheses and other orthopaedic implants is still partially unknown. The acting loads are required for different purposes. 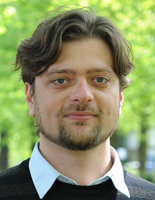 Together with the knee the hip is the most heavily loaded joint. At higher age many people suffer from arthrosis which may require to replace the joint by an endoprosthesis. In Germany alone more than 200,000 artificial hip joints are implanted every year (Source: Statistisches Bundesamt, data from 2011). Different types of implant and methods for their fixation in the bone are used clinically. All of them have specific advantages and are selected depending on the needs of the individual patient.

In most cases patients can expect that their mobility becomes restored and the artificial hip joint will work well for at least 15 years. Occasionally, however, complication may occur after some years. They may be caused by very high forces acting in the joint or wear of the plastic component used to replace the joint socket. Extensive research is performed to further improve the implants themselves and their fixation in the bone. However, precondition for any further improvement of hip implants is to know the loads acting in this joint. The instrumented hip implants, developed by us, allow to measure the forces directly in the patient's joint. With the new hip implant (Hip III) also the three moments are measured. 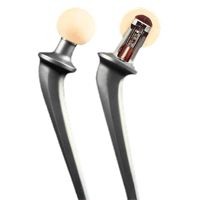 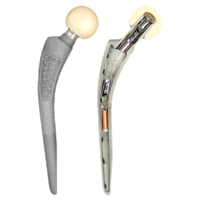 In order to investigate the heating of artificial hip joints more closely, a hollow shaft hip endoprosthesis with temperature sensors and two 8-channel telemetry transmitters was instrumented. Thermistors sensed the local temperatures at eight points. Three strain gauges in the neck allow the measurement of the three joint force components, a fourth one in the upper shaft area measures the strain of the shaft. One telemetry transmitter is located in the neck of the prosthesis, the second in the shaft. Since May 1997, five instrumented hollow shaft hip endoprostheses have been implanted in four patients. 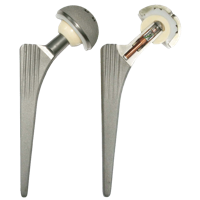 In order to also measure the moments occurring in the hip joint, a standard hip implant in the neck area was equipped with specially developed semiconductor strain gages and a 9-channel telemetry transmitter. Using the six strain gauges, the load-induced deformations of the neck are recorded approx. 120 times per second. Since April 2010, ten hip endoprostheses with 9-channel telemetry transmitters have been implanted in 10 patients and forces and moments measured.

When walking the joint forces are typically 250% body weight (Video 754kB). However, the loads are individually different. But already during slow jogging they can rise to 500%BW [Bergmann et al., 1993] [Bergmann et al., 2001].

Standing on one leg causes almost the same strain as walking slowly.

When climbing stairs, the loads are not significantly greater than when walking, but the torsional stress on the implants is increased. Video 709kB) [Bergmann et al., 1995].

When riding a bicycle or on a bicycle home trainer, the hip joint load is typically only half or one third as high as when walking (Video 752kB). A home trainer is therefore well suited for circulatory or fitness training of patients with artificial hip joints or arthrosis in the hip joint.

When elderly patients use crutches, the load on the hip joint is much less relieved than is commonly assumed.

Soft shoes or soft floor material are not suitable for reducing the peak forces in the hip joint [Bergmann et al., 1995].

Further data are available from the database OrthoLoad.